Apple Pay was introduced to the UK in July 2015 following the official launch in the US in 2014, and has become extremely popular and hugely topical for retailers and food and drink establishments.

Apple Pay is designed to change the way customers shop.  Apple are trying to revolutionise credit card payments, moving consumers away from the traditional need to carry around lots of credit cards.

Apple Pay has struck a deal with Transport for London (TFL) where you can use your watch or phone to travel around on the Tube, bus and rail networks. You can also use Apple Pay to make single touch purchases within apps and via card machines. Starbucks, Subway, Wagamama, Waitrose, CostCutter and JD Sports are just a few retailers who accept Apple Pay via their card machines.

How Does Apple Pay Work With Card Machines?

Apple Pay uses the near-field communication (NFC) chips embedded in your iPhone 6, iPhone 6 Plus and Apple Watch to pay for goods and services by holding the device near a credit card machine or reader, as you would a contactless debit or credit card.

You don’t need to enter your PIN to verify your identity – the technology follows the same experience as on our contactless card machines.

Approaching a card reader with your smartphone automatically wakes up Apple Pay – without having to open an app. You then press your finger to the sensor and it verifies the payment using the credit or debit card details you have already set up. Your phone will beep to let you know it’s been received. 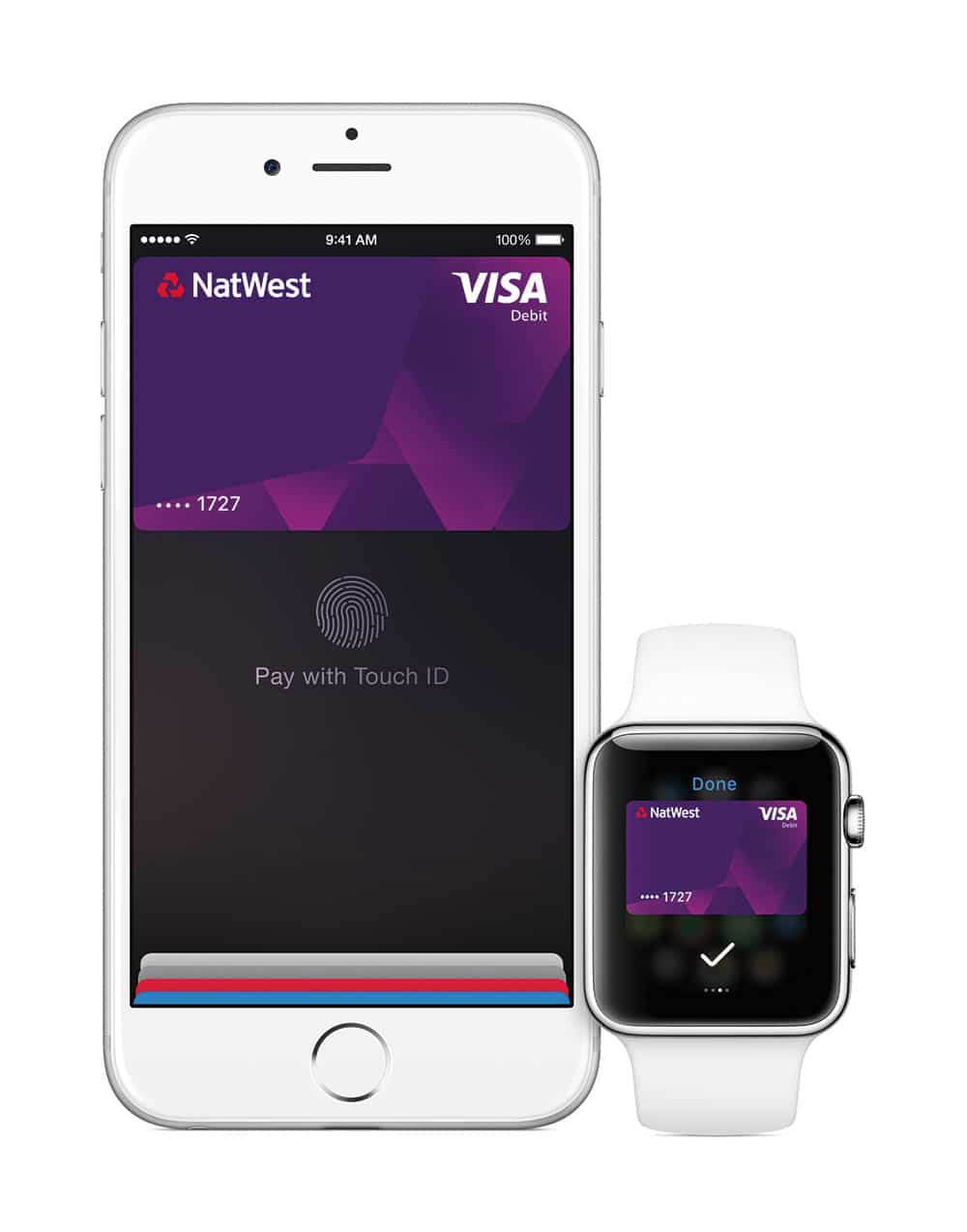 Who can use Apple Pay?

That depends on which Apple device you’ve got and on your choice of bank. To use Apple Pay you need a compatible iPhone, Apple Watch or iPad, and these need to be running a sufficiently advanced version of iOS. Phones like the iPhone 5s won’t work with Apple Pay, because it doesn’t have the NFC chip which Apple Pay needs to work with the credit card machine or reader.

The iPhones 6s and 6s Plus will support even faster Apple Pay due to improvements to the Touch ID coming with those devices.

Is there a capped limit?

The majority of payments using Apple Pay are capped at £30.  This is the same limit applied to transactions made using a contactless credit or debit card machine in a store or restaurant for example. However there are some exceptions – for example retailers using the Ingenico 250 series credit card terminals will be able to pay for a purchase of any value using Apple Pay.

Are there any alternatives to Apple Pay?

PayPal is hugely popular for online transactions, and has also been trialed in-store.  Android Pay which is seen as Apple’s major competitor was launched in May 2016. Other payment options available to UK retailers are PayM or Pingit. In July 2015, Barclays teamed up with Zapp to allow Pingit to be used at point of sale card terminals in-store.

Zapp was launched in late 2015, and has secured various awards within the industry for its innovative payment solutions. By simply clicking the ‘Pay by Bank’ app symbol online, will automatically open a consumer’s bank app on their phone. Once they are in, they are then able to process payments safely and securely.

What is Apple Pay?
Apple Pay is a unique mobile payment and digital wallet service produced by Apple that allows users to make payments using an iPhone, Apple Watch, Mac or iPad. Apple Pay does not require Apple Pay-specific contactless payment terminals, and can work with existing contactless PDQ terminals. The payment system is designed to change the way customers shop.
When was Apple Pay launched in the UK?
Apple Pay was launched in the UK in July 2015.
How does Apple Pay work?
Apple Pay uses the near-field communication chips that are embedded in your Apple Watch, iPhone 6 or iPhone 6 Plus to pay for goods and services by holding the device near a Chip & PIN terminal, as you would a contactless debit or credit card. You don’t need to enter your PIN to verify your identity – the technology follows the same experience as on our contactless card machines.
Which banks and cards support Apple Pay?
Apple Pay works with M&S Bank, Bank of Scotland, Barclays, Halifax, Ulster Bank, NatWest, American Express, Santander, Lloyds Bank, Nationwide building society, Royal Bank of Scotland, H-SBC, First Direct, TSB and MBNA.
Is there a set limit for a transaction on Apple Pay?
There isn’t a set transaction limit with Apple Pay, but contactless payments are currently set to £30 in the UK (Previously £20) Apple says on its own support page that customers may not be able to use Apple Pay for purchases over £30, but there isn’t a standard cut-off amount
Will Apple Pay work on my card machine?
If you have a contactless card machine and are able to accept card payments then you will be able to accept Apple Pay.
Are there any additional fees to using Apple Pay?
There is no additional fee to using Apple Pay.
Are Apple Pay payments charged as card present or card not present?
Payments made using Apple Pay within apps are card not present transactions. Payments made using Apple Pay UK in stores are card present transactions.
Is the technology for Apple Pay safe
Apple Pay protects your transaction data, personal information and information relating to debit and credit cards with industry-leading security. You can source greater information from the Apple website.
Menu